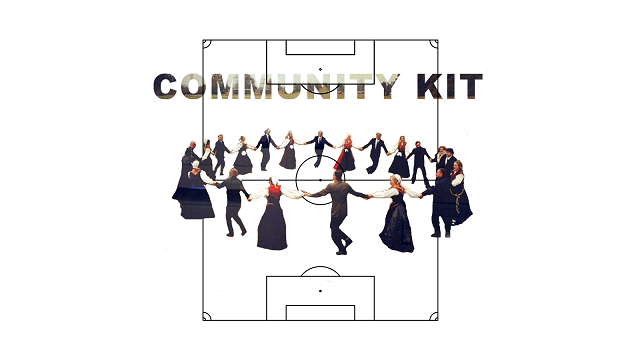 From the initial desire to set up both an infrastructure and a virtual platform, Community Kit was remade into a theoretical-artistic research network. In an attempt to create a supporting system for the already existing emerging community in the Ljubljana district of Fužine, the final target of the first project, i.e. an intervention in the park, was redirected to researching the foundations of the community itself. In order to reflect on the complex phenomenon of community, it was essential to make a shift towards archetypal social structures and to speculate on the man of the future; similarly, to move towards an investigation of basic content and events that form a community and its habitat. In order to make the most coherent definition of the latter, we sought out cooperation from a large number of individuals, who used their interdisciplinary projects to interpret the given thematic baselines: body, energy and information sources, zoē and bios, utopia.

These individual segments of the project were further analyzed within an existing community and its habitat – conversations with people of Fužine, as collected in an audio-visual archive, represent a mirror image of the theoretical activity. This mirror provides an overview of the distance between speculative thought present in artistic interpretations and a concrete, more personal understanding of community and space, both of which are notions that are fully integrated into every individual’s everyday life.
We wanted to make the exit from man-space combination in the form of a publication, short pieces that touch on the phenomenon of space from as many content positions as possible, and extending beyond the discourse typical of architectural and urban planning practices.

The three integral parts, intertwinning to form Community Kit, serve as a platform of new reflections on the notions of community and space.

The exhibition is part of the “Project space” programme. The programme is composed of smaller, shorter-run exhibitions chosen on an annual open call basis and which take place in the west wing of the Fužine castle. The exhibitions are co-produced together with partners and follow the criteria for uniformity of heritage in the fields of architecture, design and photography.

We reserve the right to change the programme.