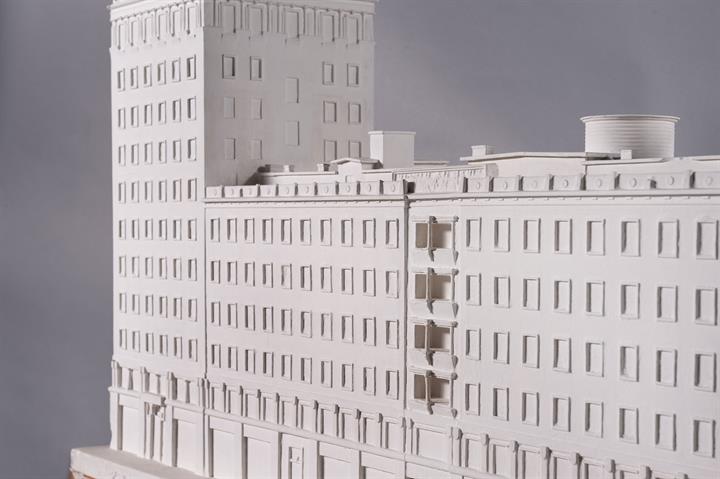 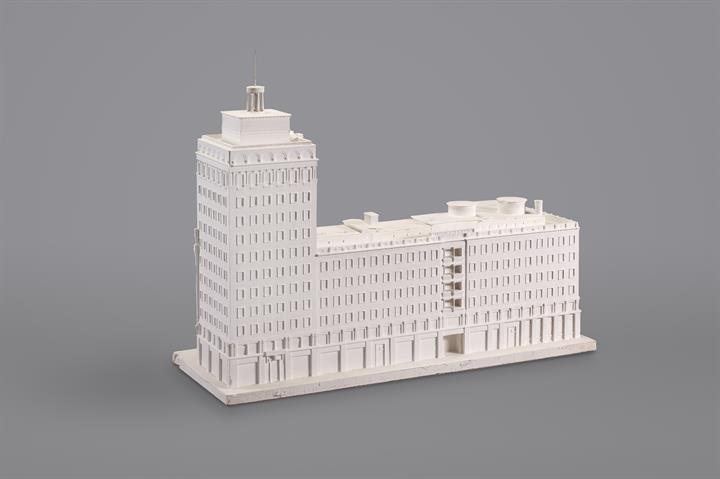 The Ljubljana’s Nebotičnik (Skyscarper) exhibition is part of a series of events designed to present items from MAO collections. Taking place in the Chapel at the Fužine Castle, the exhibition will focus on Nebotičnik, once the tallest building in Ljubljana.

Ljubljana’s Nebotičnik (Skyscraper) is a high-rise marked by superlatives – metropolitan-inspired it was in its time the tallest building with the largest relief, the longest passageway … Controversial already at the time of its construction in the early 1930s the sky-scraping building was the subject of heated debates between the professional and the wider public. It had its advocates and opponents, with regard to both its height and silhouette, with which it rivalled the dominance of Ljubljana Castle and church spires that dotted the city skyline. For its opponents Nebotičnik meant a “blow with a fist on Baroque Ljubljana”, whereas the supporters saw the new building as the harbinger of a modern, metropolitan heartbeat in the nation’s capital. Both camps argued about the viability of its height and questioned its financial soundness. The Nebotičnik project was a huge technical challenge also in terms of seismic safety, which received a lot of attention.

More than a decade had passed from architect Šubic’s first idea for the skyscraper in 1922, when the Chicago Daily Tribune announced the competition for “the most beautiful and distinctive building in the world”, to the opening of the Nebotičnik rooftop restaurant in 1933. It was a period of turbulent economic and social change, with post-war optimism giving way to the Great Depression at the beginning of the 1930s, which left the most profound mark on the country’s construction industry. The fact that Ljubljana had the tallest building not only in the Kingdom of Yugoslavia, but for some time even in the whole of Central Europe, and that Nebotičnik remained the tallest building in the Balkans for quite a while, is a big deal and certainly something to be proud of. The construction of a new building type would have been substantially easier in Zagreb, the kingdom’s financial centre, or in Belgrade, its capital city. This testifies to the boldness and ambition of the pre-war bourgeois elite in Ljubljana, and Nebotičnik came to be its symbol.
Architect Vladimir Šubic (1894–1946) used models to help him design buildings, and Ljubljana’s Nebotičnik, or better “the Nebotičnik complex”, was no exception.
MAO keeps the models of the “Nebotičnik complex” and of the residential building with shops on the ground floor at the corner of Miklošičeva and Pražakova streets in Ljubljana, whereas the photographs of the model of the residential block in Valvazorjeva street in Ljubljana comes to us from a private collection. Visitors will be able to see the scale model as well as a tin model of Nebotičnik – a paperweight presented to individuals involved in the construction of the building, among them architect Jože Plečnik.
>> Curator: Bogo Zupančič
Share