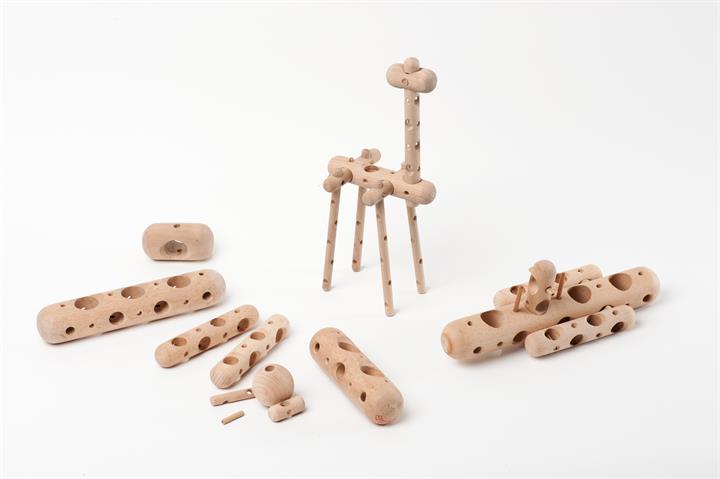 System of Wooden Toys by Niko Kralj
Architect and designer Niko Kralj has donated to Museum of Architecture and Design an extensive collection of his work. With this exhibition in the Chapel of the Fužine Castle, the museum presents the part of his design that is unknown to the general public and concerns child’s play. Play is an important element in a child’s learning curve and the basis of its cognitive development. Play helps children understand, connect, and make sense of what they have learned through their ideas, feelings, and interactions with others.  A toy gives substance and idea to child’s play.
The exhibition presents sketches, designs, documentary material and a prototype of Kralj’s system of wooden toys. The idea behind these toys is to provide an incentive for the development of construction and motor skills. With sustainability in mind, Niko Kralj proposed to use scraps of solid wood from furniture industry and turn them into trusses for children to assemble into diverse compositions based on his templates (e.g. giraffe, dog, airplane, submarine, or car) but also give free rein to their imagination, creative thinking and probing mind.
In May 1976 Niko Kralj filed a patent application with the Federal Patent Office in Belgrade for Sistem Constructa, the product intended for children as a toy or, in its larger version, as an item of playground equipment.
In his application Kralj wrote that his system of wooden toys, the Sistem Constructa, solves the problem of child’s safety as its component parts have no edges or angles. The solution for the module’s dimensions, its increases and proportions was built based on the ratio between the numbers of the Fibonacci sequence and, with regard to the width-to-height ratio of four sticks as well as pegs, in dependency of the radius of the profile.
The system allows an almost endless number of different structures and thus represents a universal technical construction toy for children of all ages.
In parallel with Sistem Constructa  Kralj lodged a patent application for Regal Constructa, a “mass prefabricated item of social furniture for man’s habitation”. Both the furniture system and the system of wooden toys were entered by Niko Kralj in 1979 in 8th Biennial of Industrial Design (BIO 8). Renamed by Kralj to Mirna toy, the system of wooden toys was displayed at the exhibition under the category of concepts, while the furniture system was presented as Sistem Konstrukta. The recipient of the highest recognition at 10th Ljubljana Furniture Fair, the Ljubljanski Zmaj Award, the Konstrukta furniture system went into regular production  in 1979.
Unlike the furniture system, the construction toy never went into production. The museum, however, recognised its potential for a possible future. Part of museum’s mission is also to establish an innovative space for future-oriented creative, socialising and learning practices that also draw from the past and our cultural heritage. We give special attention to children and focus on bringing them closer to good architecture and good design through various programmes and activities. Museum artifacts are a starting point for the creation of many new teaching aids and instructions.
The museum has asked the heiress and the copyright owner for the permission to produce the 0 series of replicas and thus verify the usefulness of the product within the pedagogical process. Initially, this would take place on a smaller scale in the framework of museum activities and then potentially extend to the broader concept of education, given that on the national level architecture and design are still underrepresented in the school curriculum.
Based on our excellent cooperation  during BIO 25 we have once again joined forces with Kočevje High School in the production of replicas. The Kočevje Wood Festival also showed great enthusiasm for the project and has undertaken the initiative for a future production of this modular wooden toy which, however, will have to be subjected to many screenings and evaluations in order to reach its market potential in line with the toy’s original purpose.
In today’s world of consumerism, when products, among them also toys, are associated with the anonymous and often inhuman production in the countries of the Far East, and child’s play increasingly migrates into the digital world determined by completely new set of rules, a toy’s quality should be of vital importance.
Share